A small castle guards the sea of Wigtown Bay. Carsluith Castle is small but old. And beside it is delicious food.

Some call much larger mansions than this castle their own. Carsluith Castle in southwest Scotland near the village of Kirkcudbright certainly doesn’t impress with size. But that’s also what makes it so worth seeing. 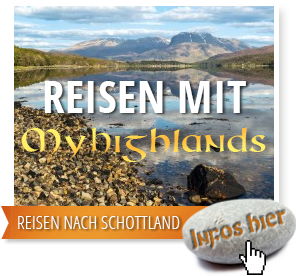 Flanked by two white houses, with a courtyard in front and the sea behind – the location fits, anyway. And the fact that one of the two houses also happens to be a café and salmon smokehouse, whose offerings can be eaten at tables in the courtyard, makes a stop here all the more enjoyable.

Carsluith Castle was built from 1400 onwards in the L-shape common at the time. This shape had the advantage that the entrance could be at the angle of the L, making it more defensible. So far so typical. What is unusual, however, is that a balcony opened onto the courtyard, from which the owners could keep an eye on the goings-on around the castle.

Visitors can also explore the castle through the small door – free of charge and at any time. Inside, the chimneys of the three levels can be seen. Noticeably absent is a kitchen. The castle was so small that it had none within its walls. For the lords of the castle, food was prepared directly in the hall’s fireplace; for larger feasts and for servants, there was another cooking area in the area around Carsluith Castle.

Inside the castle, visitors can walk up the spiral staircase to the lords’ room, enjoying their views over the sea.

Having explored the interior extensively, you can turn right through the passageway on your way out the main door. Then you reach the back of the castle and the shore to the sea.

Once visitors have had their fill of the castle, they can return to the courtyard and eat their fill here. For the Marrburry Smokehouse provides not only smoked salmon but also smoked brie or just coffee and cake.

Castle, smokehouse and a meal on the farm make a stop at Carsluith Castle entertaining and tasty.

Knowledge: The Inhabitants of Carsluith Castle

Around 1400 the residential tower was still built without the L. It was only later that the extension was added. The coat of arms above the door bears a date with only the first three digits to be read: 156. At this time the stair tower was probably built.

The castle was certainly not a fortress of national importance, probably intended simply for the protection and pageantry of its owners.

Carsluith Castle was inhabited mainly by the Broun family. The most famous member of this family was Gilbert Broun, who was the last abbot of Sweetheart Abbey from 1565 to 1612, before the Reformation put an end to it.

The castle remained in family ownership until they sold it in 1748. There were several owners after that, and today Carsluith Castle is in the care of Historic Environment Scotland.

With sat nav:“DG8 7DY” will take you straight to the castle.

Without sat nav: Coming from Dumfries or Kirkcudbright, take the A75 west to Newton Stewart. Eventually the sea appears on the left, then it’s not long before Carsluith Castle comes into view.