About 30 meters the water masses plunge down from the Loch na Gainmhich, forming a deep gorge. This wonderful waterfall can be visited.

The stony path leads past a jagged rocky outcrop into a deep ravine. Those who make it to its end are rewarded by a gigantic water feature. Like a veil reminiscent of a wailing widow – hence Wailing Widow Waterfall – the water plunges 30 meters into the depths here. In the process, it repeatedly hits jutting rocks or steps. It’s a good thing this spectacle is within walking distance of one of the country’s major tourist routes: the North Coast 500.

From the small (!) parking lot on the side of the A894, head straight into the canyon. But ATTENTION: Here is no clear and easy way. It really goes over stick and stone. Especially with moisture the narrow path becomes slippery. Proper shoes and a certain fitness are more than appropriate here. It takes about 15 to 20 minutes to get to the waterfall.

The Wailing Widows Waterfall is also not immediately visible. At first, a rock spike appears as the lone guardian of the gorge.

Wrong walking is not an option for hikers here. It just keeps going until the waterfall appears.

And the view of the cascades from below finally rewards the arduous journey.

When the weather is good, visitors can certainly get close to the Wailing Widow Waterfall.

Seen enough? The way in is also the way out. But if you still want to see where the water originates and what Wailing Widow Waterfall looks like from above, you can follow the A894 road further south. A little way up the mountain there is another parking area, the Quinag Car Park Viewpoint.

From here, those who wish can then hike along the shore of Loch na Gainmhich to its outlet. Again, a WARNING: the trail goes through muddy terrain. Nevertheless, it is a bit faster to get to the waterfall here. About 10 minutes it takes.

Once you reach the small river, you can follow it to the cliff and walk along the gorge for a bit.

However, an explicit WARNING here as well: there is no belay, no railing, no warning signs there. Watch every step, keep a safe distance from the abyss. Not that the name “Lamenting Widow(er)” refers to you. Be careful here.

Our paths we have charted here. Green is the way into the ravine, red is the upper path by the Loch.

The name “Loch na Gainmhich” comes from the Gaelic “gainmheach” – meaning “sandy”. So, roughly speaking, it is the “sandy loch” from which the water of the falls is fed. Incidentally, this name is also found x-fold on the maps of Scotland.

The waterfall is also still known as “Hanged Man Falls” – “Waterfall of the Hanged Man”. There is a specific story about it: once the rustler Donald of the Moss escaped from Isle of Lewis to Assynt, where he was granted asylum. However, he killed a young man a short time later. As punishment, he had to dig his own grave and tie his own noose. He was strung up on the rock needle at the entrance to the gorge.

Other legends revolve around the fact that a hunter fell into the gorge and his mother jumped after him out of grief. And a more recent one says that in the 1990s, a couple on their honeymoon sought a campsite at Loch na Gainmhich. In the morning it was foggy, and the woman left the tent a few steps. She did not see the precipice and fell into the glen.

With navigation device: “IV27 4HW” brings one to Unapool. From here continue south along the A894.

Without sat nav: Take the west route of the North Coast 500 south along the A894. After the bridge at Kylesku and past Unapool, a small muddy parking area appears on the left of the road just before a bridge. Park here if there is still room.

BesonderheitThe waterfall from Loch na Gainmhich is located on the NC500 and is often called the Wailing Widow Waterfall. It can be visited on foot. 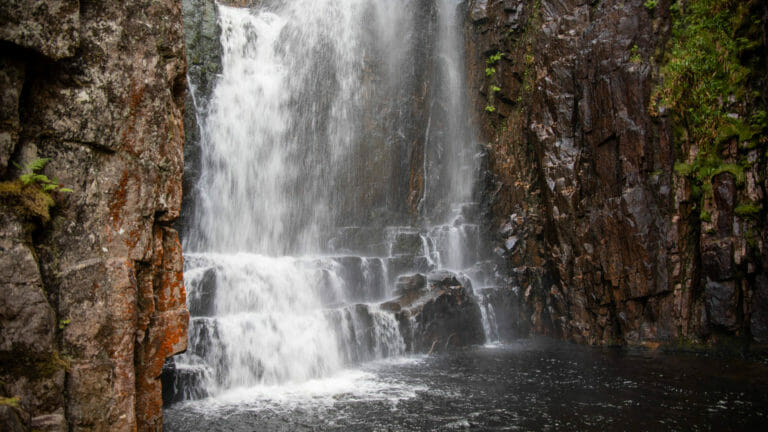 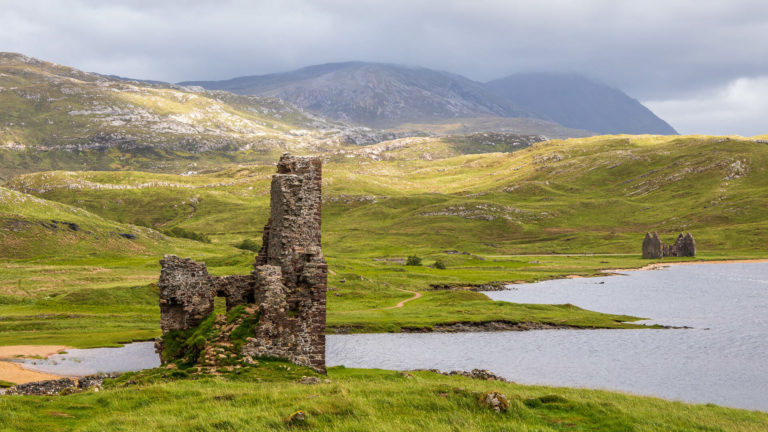