The road winds upwards along the steep massif. Once on the pass, a magnificent view opens up over the Quiraing to the bay of Staffin.

At some point, there must have been a huge crash here. You see, the Quiraing was formed by a landslide in which the land mass slumped away downward, leaving the steep cliffs standing. It doesn’t take much imagination to picture this when looking at the bizarre mountain range.

In fact, this landslide is still ongoing too. It’s just happening very slowly. The land is still slumping here, still enough that the road up the mountain needs to be repaired every year.

The Quiraing, by the way, is only the northernmost ridge of the Trotternish mountains. The whole peninsula consists basically of a long and flat mountain range, which slopes more precipitously in the east of the island than in the west.

The Quiraing can be circumnavigated once by car. The round trip starts in Portree and drives up the main road A855 at the east coast to Staffin. There you take the turning to the left, signposted “Quiraing”. The road winds up and there is a car park on the left. From here, one not only has a magnificent view, but one can also hike into the mountain. Then the road continues across the plateau to the west, where it meets the A855 again just before Uig. Here follow the sign for “Kilmuir” to the right, skirting the Quiraing to the north.

The word “Quiraing” comes from Old Norse, as the Vikings left their footprints here – as they did in many places on the Isle of Skye. So the Gaelic word “a’ Chuithe Raing” is made up of the Norse “kví” for fold and “rank” for “crooked”. It simply means “enclosed sloping place”.

Tip: Over the Hills to Highlander Scenery

If you arrive at Quiraing Viewpoint by car, you’ll see some grandiose scenery. That’s basically enough, but if you have some time and a pair of walking shoes, you can do some more hiking.

For example, it is worthwhile to climb up the slope to the south. Then, some more rock needles and a view over the wide landscape open up. By the way, a scene of the movie Highlander takes place on this slope with the mentioned rock needle in the background. For about 10 seconds it appears during the sword practice between Connor MacLeod and Ramirez, see here on Youtube (unfortunately in French).

In addition, you also get a better view of the Quiraing panorama from here. The photo with Staffin Bay at the very top of the article is taken from this position.

Personal note: The most beautiful view on Skye

Even the approach across the plateau from Uig is an experience. But the view from the viewpoint is gigantic – especially in good weather. For me, the panorama here is really so far the most beautiful view on the Isle of Skye. Don’t miss it!

With sat nav: enter “IV51 9JY”. Then you end up at the foot of the Quiraing, near the turnoff to the pass road. This goes then of course from the east (Uig) as from the west.

Without sat nav: Coming from the east, i.e. from Uig or Dunvegan, you take the A87 and then turn right in time onto the A855 towards Staffin. Shortly after the rise of the A855 behind Uig, a small road with the inscription “Staffin via Quiraing” goes away on the right. Take it and continue until you reach the large car park after the plateau.

Coming from the west, i.e. from Portree, drive to Staffin and continue for about a kilometre through Stenscholl. Soon you will see a sign pointing to the left with the inscription “Quiraing”. There it goes up the pass road.

Postcode für Navis"IV51 9JY" takes you to the western base of the mountain, near here the driveway goes up 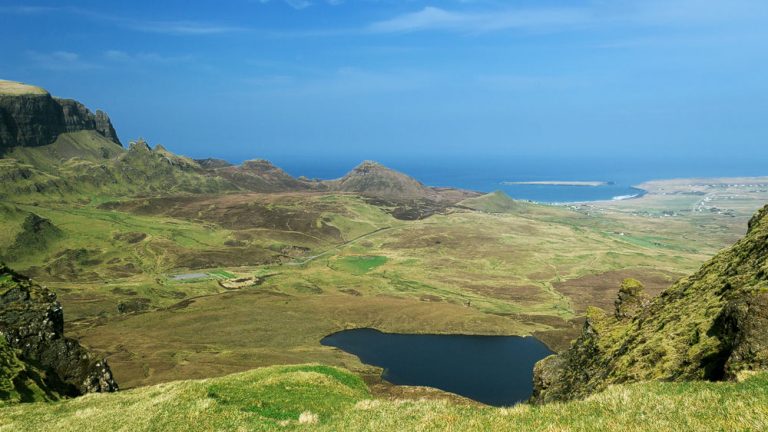 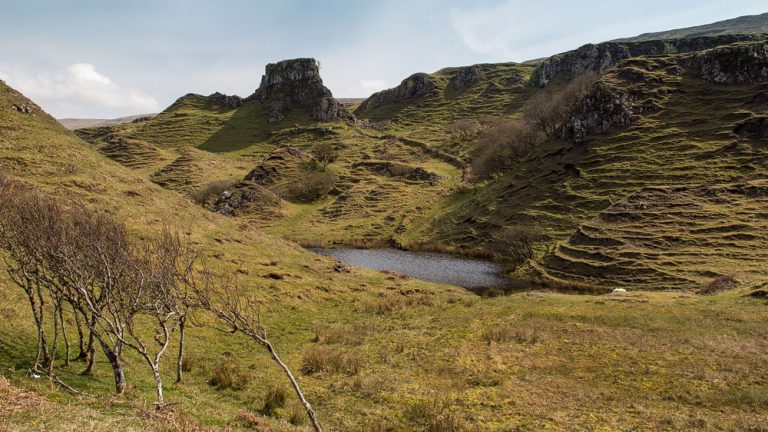 Fairy Glen – where the fairies live on the Isle of Skye 5.42 km