All too soon you rush past this ruin on the way to Elgol. All the while it tells tales of nasty priests, blank marble and the only railway on Skye.

A vine climbs up the crumbling outer wall as if trying to replace the missing roof of the old church. It uses the empty window frames and doorways as climbing aids, which have long since ceased to provide shelter from the wind that blows over the mountains and the nearby hole through the former nave. The building stands on a knoll where tombstones struggle to hold themselves upright, as if still trying to bear witness to  once better times.

Cill Chriosd or Kilchrist, in German “Christ Church”, is the name of the dilapidated ruin that lies on the road between Broadford and Elgol on the Straithard peninsula of the Isle of Skye. It was once the moral support for a thriving community that settled here in the valley. Thriving because there were many workers nearby quarrying the famous Skye marble. There were factories and workers’ quarters here, though today, admittedly, there is almost nothing of that.

Except, of course, Cill Chrisod. The little church defies time as best it can; now, after all, it has been there for at least 500 years, having been first mentioned in 1505. At that time it was simply recorded that a certain Chaplain Kenneth Adamson took the place of his predecessor John MacGillivray here. Since then, a record of the pastors has been kept.

Not always were these pastors popular with their flocks. Even today it is reported that the first Protestant minister turned out to be a denunciator in 1627, as he would report any Catholic to the government – at the time there were fierce disputes between the two religious groups in Scotland and the Protestants wanted to stamp out the Papists. He is also said to have been no philanthropist in other ways. So he allowed the workers in the valley only one meal on Sundays instead of the usual two – on the day of rest it was just to rest, even with a hungry stomach. And so the memory of the Reverend Neil MacKinnon remained negative until now: greed and baseness says him the info-board in the church even today.

Until 1840, Cill Chriosd remained a center of faith on the peninsula. But in that year a new church was built in nearby Broadford and the congregation moved there. That’s why today Cill Chriosd is a ruin worth seeing in an appealing setting.

Knowledge: The only railway on Skye

For two centuries, marble of the finest quality was quarried on the Strathaird peninsula in the Strath Suardal valley. By 1900 they even wanted to do it on a large scale, and so a company was set up here, and in 1907 a railway was even laid through the valley to Broadford, five kilometres away, which would then take the stone blocks to the pier for shipping. At first the carts were pulled by horses, but by 1911 there was a small locomotive as well.

The venture failed in 1912, however, and all the workers’ homes, factory equipment, and tracks were dismantled.

By the way, what is now Cill Chriosd is not the first church on this site. There is said to have been a place of worship here as early as the 7th century, its foundation dating back to Saint Maelrubha.

As is so often the case, it pays to do a little reading of the gravestones in the cemetery. It’s noticeable, of course, that many MacKinnons lie here – Straithard is the home of this clan, whose members also helped in the escape of Bonnie Prince Charlie and whose descendants still run a boating business in Elgol today.

Behind the church, incidentally, begins Loch Cill Chriosd, which is well worth seeing. When the mountain panorama is reflected on the water, you can take great photos here.

In Broadford, turn off the A87 onto the road towards Elgol. After about 5 kilometres the ruin will appear on the right hand side.

BesonderheitOld church ruins on the Straithard peninsula on the Isle of Skye. 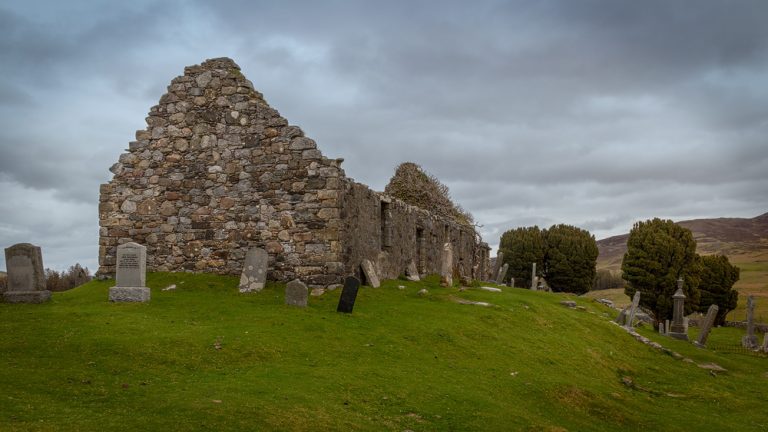 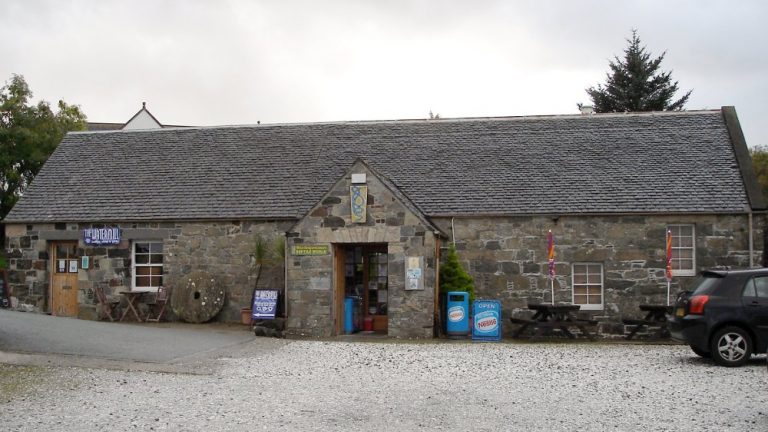 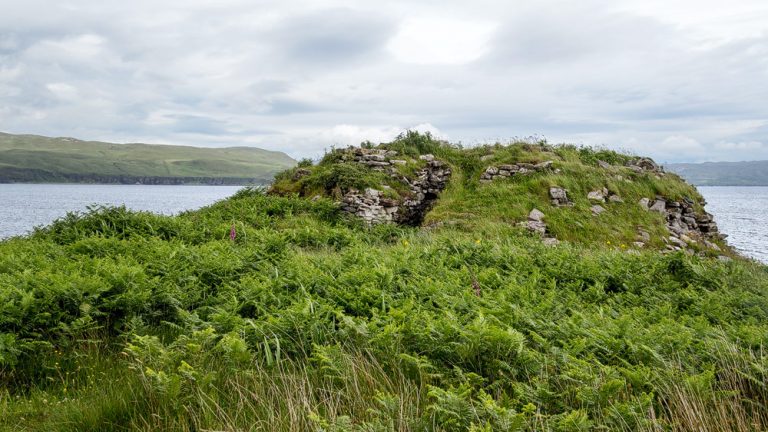