Majestic, it overlooks the rugged mountains of northern Skye. The Old Man of Storr is a beautiful, gigantic rocky outcrop. The landscape behind it a grandiose backdrop.

He looks a bit like an oversized menhir. But no Gaul ever laid a hand on the giant. He was formed purely naturally. The Old man of Storr is only the end of a rocky ridge worth seeing. For the mountain “the Storr,” shows a steeply rising rock formation, which bears the name “the Sanctuary.”

By the way, this extremely bizarre landscape was immortalized in a motion picture as recently as 2012. In the Alien prequel “Prometheus,” scientists find clues to humanity’s extraterrestrial origins here at the very beginning.

The Old Man of Storr can be seen in the distance from the road. But it is much more exciting to venture up the hike. Because from there you have a magnificent view over the plain behind the rock needle. The most beautiful pictures can be taken from here. Moreover, you only comprehend the grandeur of the Old Man when you stand in front of it.

Hike: The Way to the Old Man of Storr

The climb up to the Old Man of Storr is quite a little hike, taking anywhere from 45 minutes to 1.5 hours, depending on your fitness. At the beginning there is still a wide gravel path, but later the direction is at least clear.

The trail starts at the parking lot. It’s marked on this map:

Tip: Photos of the Old Man of Storr from afar

For those with a little more time, leave the Old Man to the left for now and march a little further along the flank of the mountain. There rises a hill, up which a narrow path leads. At the top, the motif then emerges, combining the rocky outcrop, parts of the mountain, and also still Loch Leathan and Fada in the distance.

By the way, the Old Man of Storr is great to include in the round trip through north Skye.

The Old Man is a giant: the rocky spire alone towers 48 metres. The highest points of the surrounding Storr Mountains, after all, make it to 719 metres above sea level – the highest point on the Trotternish peninsula. The glaciers of the last ice age were the architects of this beautiful landscape. They left behind a rock artwork, which partly consists of up to 24 volcanic rock layers.

The name “Storr”, which refers to the mountain to which the Old Man belongs, comes from the Norse and simply means “big”. It is believed that the Old Man of Storr and the mountain were used as important landmarks by the Vikings.

Without sat nav: From Portree, follow the A855 towards Staffin (not Uig and Dunvegan) – the road is also called Staffin Road at the start. The drive only takes about ten minutes and as many kilometres. Then a car park appears on the left from where the walk starts. Here are also quite a few information boards to help. 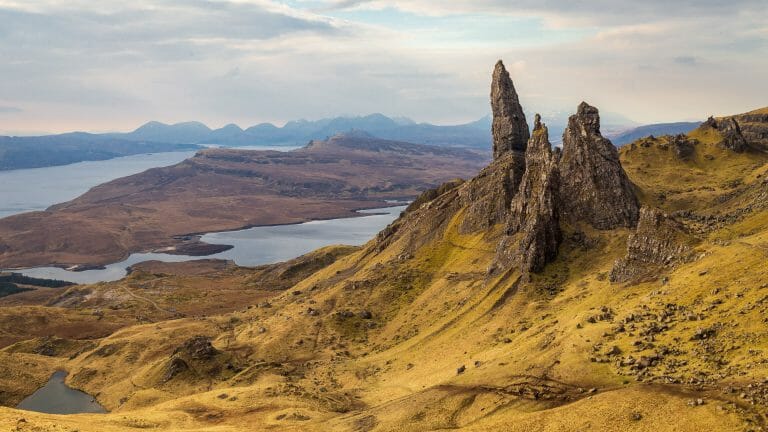 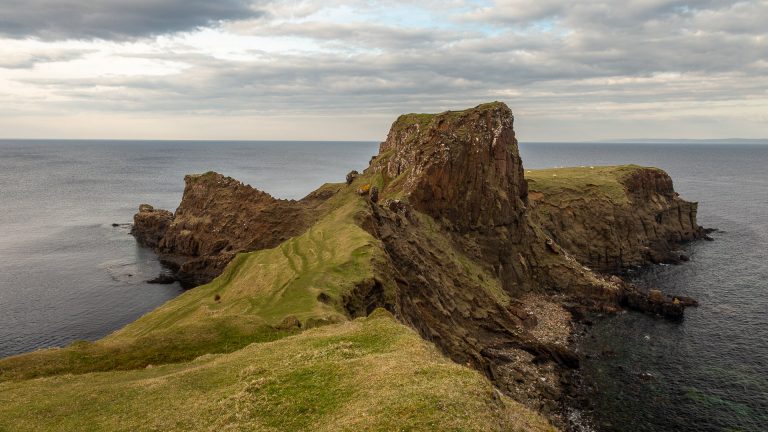