She is the Queen of Skye – the capital Portree. And royal is also her name: “Port-an-Righ” is Gaelic and means “Port of the King”.

Portree is a relatively small capital city – only around 2,100 people live here. Yet it’s rightly the hub of life on Skye, effectively dividing the island into north and south halves. Thus, as a Skye tourist, one hardly gets around Portree. It is the traffic junction; all big bus lines of the island start at the central place of the city, the Somerled Square.

Around the Somerled Square, some more important things of the daily life are grouped: a church, the police station, a bank and restaurants, a hotel, … of course not to forget: The beginning of the small shopping street called Wentworth Street, which leads straight down towards the harbour and hawks many a trifle for tourists.

Portree’s harbor is unique. Cliffs, hills and the bay make it a safe anchorage for ships. And so from here small boats go out fishing and sailors seek shelter for the night.

The harbour was developed as early as the 18th century to encourage fishing. Later, even ferries stopped here – and unfortunately, in the course of the Highland Clearances, many Scots also left for America.

Quay Street is lined with houses with colourful facades, housing hotels and restaurants as well as Christian charities. Portree is just a feast for the eyes and the palate.

Just above the harbour overlooking the sea is the Royal Hotel, a not too pretty building. But it has history: this is where a long flight through the Highlands ended in 1746 after the failed Jacobite Rebellion. Bonnie Prince Charlie said goodbye for the last time to his faithful escapee Flora MacDonald in this building. At the time, however, the house was still called “MacNab’s Inn”.

Also certainly worth mentioning is the Aros Experience Center – it’s relatively new, though, so I haven’t seen it yet. It’s just outside of town and houses exhibits, a theater, and a shop, among other things.

Tip: A photo from the hangman’s perspective

Directly above the harbor line with the ferry terminal at the end, a hill juts deep into the bay. The locals just call it “the Lump”. In less civilized days, the executioners would string up those condemned to death on its crest.

The Lump is worth a climb. Because instead of gallows, today it offers a nice lookout tower. Nice photos can be taken from up there.

Knowledge: Why Portree is the King’s Port

In 1540, the Scottish King James V (James V in English) entered the natural bay with several warships. True, the rule of the Lords of the Isles was passé. But still the Highlanders behaved quite rebellious towards the king.

James V now wanted to make sure of the loyalty of the clan leaders and made his presence felt. He held court and took hostages. In memory of these events the place was from now on no longer called Kiltraglen but Portree – Port of the King.

I have been there a few times, but have never stayed long in Portree. However, I have come to appreciate the town as hospitable. I stayed both at the campground and once at the Backpackers Hostel. During the day I ate chips with Salt & Vinegar at the harbour, in the evening I enjoyed the pub life. However, I can not imagine a long stay. The cuillins, lochs and castles of the area offer too much distraction for that.

The A87 runs from the mainland over the Skye Bridge directly to Portree. Travel time from the bridge is about three quarters of an hour, it’s about 50 kilometres. 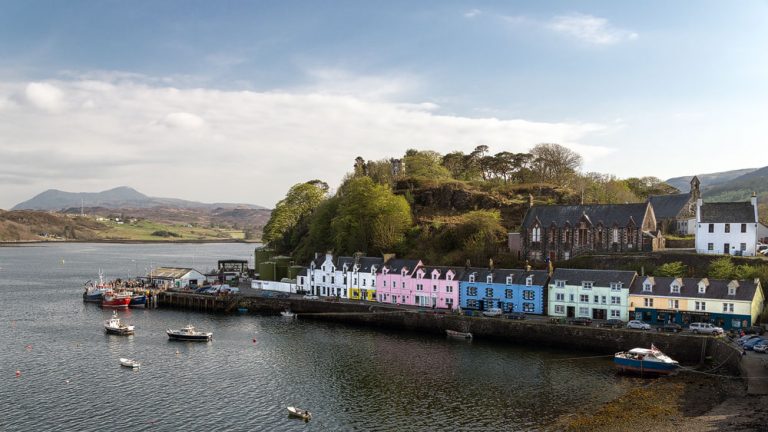 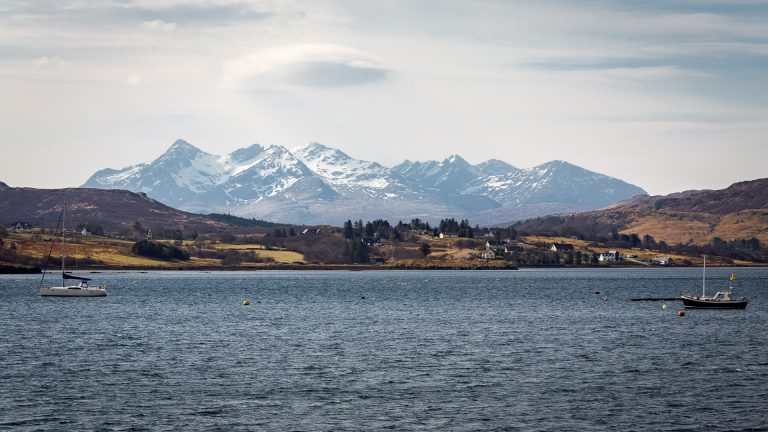