A mysterious tower of stone looms 10 meters high in the middle of the Scottish countryside. As a door, it reveals only a narrow passageway. And no scientist knows exactly what these stone cones were used for. They are brochs.

Around 500 of these constructions are known to archaeologists. Dun Telve is one of the best preserved of them. A special feature of the brochs: they are double-walled. Between the two walls, a narrow staircase spirals upwards. And as a visitor, you can even follow the course of the staircase a little way. Despite its imposing appearance, scholars now believe that the Brochs were never used as a fortification or stronghold. Because – although the wall were high – they lack meaningful defensive aids. To put it concretely: The people in the Broch had no possibility to look out or even to throw projectiles from above. Yet it was not difficult to climb the Brochs from the outside.

A sloping roof is said to have protected from the weather and allowed smoke from the fire to escape. The staircase inside the walls, on the other hand, must have served as storage for supplies, for it was rather cool and uncomfortable there. And what was stored there was remarkable: in Brochs, archaeologists found shards of clay pots containing wine and olives. Evidence of trade with the Mediterranean region long before the Romans came to Britain.

There were several wooden galleries in the Brochs where people stayed. Meanwhile, the suggestion is that important people lived here and may have received guests. Brochs may thus have been a castle on which court was held rather than a fortress against enemies.

That some defensive function was also provided can be seen from the small guard chamber just inside the narrow entrance. But who kept watch in it is unclear.

Knowledge: Brochs are not “Pictish Castles”

Earlier, some archaeologists assumed that the Picts had built and used these towers. The Picts were a northern British culture described by the Romans around 100 AD.

But the Brochs go back as far as 200 BC – that is, to the Iron Age. So it was a different people who lived there – excavations have confirmed this. Thus the sometimes used term “Pictish Castle” for the Brochs is incorrect.

There is another broch a little further down the road. It’s called Dun Troddan. It’s also worth a visit.

With sat nav: “IV40 8JX” gets you on the right road. But be on the lookout for the Brochs well in advance.

Without sat nav: Coming from Glenshiel head towards the Ratagan viewpoint, as described at the Five Sisters of Kintail. Always following the road, we head to Glenelg. Again, keep going towards the village, don’t (!) turn off towards the ferry. Continue along the coast until a signpost indicates Glenbeag to the left. Follow this. Eventually you will come to a cow gate, then the broch will appear clearly visible on the right hand side of the road. 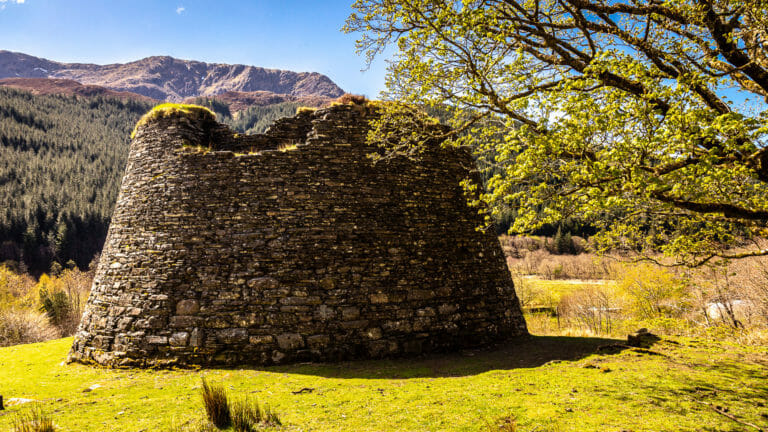 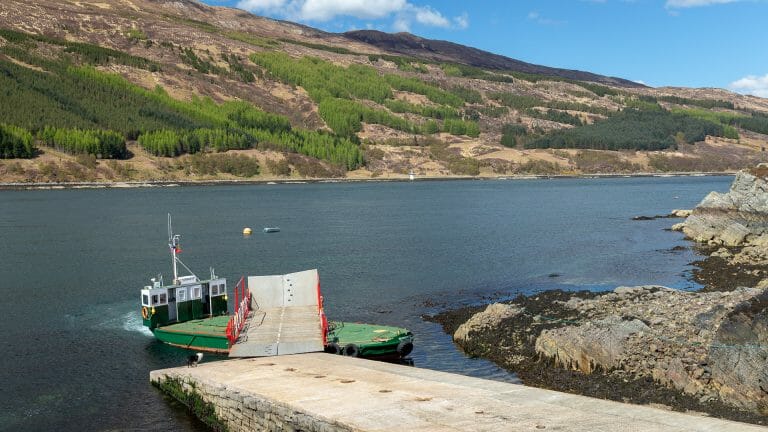 Glenelg-Skye Ferry – on the floating museum to Skye 5.33 km