“Her name will be mentioned in history, and if courage and loyalty are still virtues, it will be led with reverence” – so it says on the grave of Flora MacDonald, the heroine of the Highlands. But a visit to the cemetery is not only exciting because of her.

Even if you don’t know her, visiting her grave is simply one of those things on Skye that you should have done. Needless to say, her resting place is the largest and most prominent in the God’s Acre. But visitors will quickly notice that it can’t possibly date from the time of her passing in the 18th century – it looks fresh and new. No wonder, because the stone cross has been completely renewed. The old one had suffered too much.

Once you’ve admired Flora’s grave enough, however, you should continue exploring the cemetery. There are many curious things to see.

One grave slab, for instance, begins with the words, “Here lie the remains of Charles MacArthur, whose reputation as an honest man and remarkable piper will outlive this generation, for his manners were light and neat as his music and his fingers will”-abruptly the lines end about halfway down the stone. The slab marks the remains of piper Charles MacArthur. When he died, his son commissioned the epitaph from the stonemason. Fate, however, would have it that the son himself drowned shortly thereafter. With no chance of payment, the stonemason stopped work immediately, leaving the unfinished text behind.

A little further back is a small building, a mausoleum of sorts. It is the resting place of physician John MacLean, who was buried here in 1793. And finally, a tomb slab stands out, reminiscent of those in Finlaggan or Iona. An ancient warrior with sword and helmet. Below it lies Angus Martin. It is said that he stole the slab, namely from a grave of an early Scottish king. But it is more likely that he stole it from the grave of a clan leader of the late Middle Ages. Whatever is true, the tomb slab is a masterful piece of work and therefore worth a look.

Knowledge: Who was the heroine of the Highlands?

Flora MacDonald was the escapee of Bonnie Prince Charlie, the leader of the Jacobite Rebellion, which came to its sad end at Culloden. However, after the failed rebellion, she went on to live a long life, some of it even in North America. Back again, she was visited by the travelling Dr Samuel Johnson, who later wrote the words for her grave.

When she died, the funeral was the largest ever held on Skye.

Tip: Combine with the Blackhouses

The visit can, of course, be perfectly combined with the Skye Museum of Island Life, which is a few hundred yards up the road.

Looking out over the sea from the grave, on some days you can see the Outer Hebrides in the distance. Flora MacDonald was originally from South Uist (hence the inscription on the grave “South Uist”). So you could say she has a view of her homeland.

Although I’m a big fan of the story surrounding Flora MacDonald and the Jacobite uprising, the other graves and their aura captivated me more. They are old and weathered, all with their own past. Here is an old Celtic cross, there a fragment of a broken grave lies in the grass. Across the plain the wind of the sea sweeps, and all is still. A wonderful place.

From Portree take the A87 towards Uig. At Uig, however, look out for the turning for Staffin and (it says at the bottom of the sign) Kulmuir. Follow the sign, from here on this is the A855. Now continue on the road for about ten kilometres until you can turn right into the large car park of the Museum of Island Life.

BesonderheitGrave of the most famous woman of the Highlands. There are other memorials worth seeing in the cemetery. 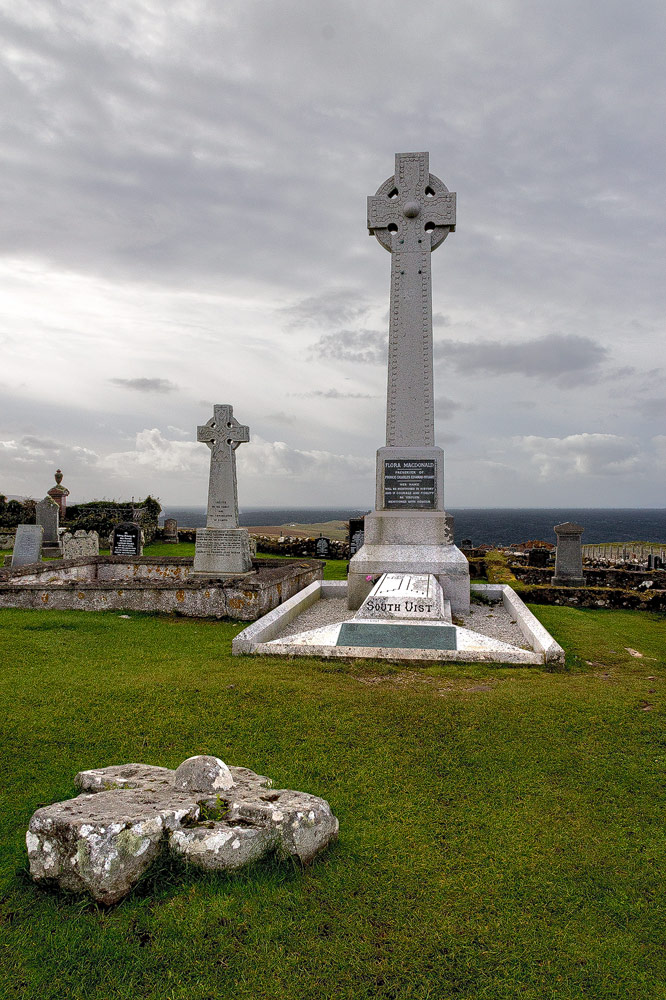 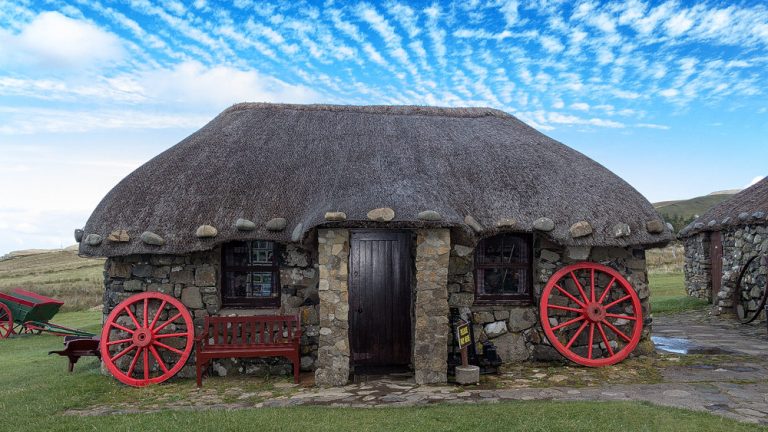 Museum of Island Life – old Blackouses on the Isle of Skye 0.40 km