Proudly overlooking the Duirinish peninsula on Skye: the twin peaks of the MacLeods Tables. How they got their name? Of course, there is a story to tell.

Alasdair Crotach, eighth chief of the MacLeods, was not a man who could bear to be reviled. He was a proud Highlander, educated and deeply religious – but just as boastful, vindictive and cruel. And that got him into trouble again and again. And what trouble!

Alasdair was a guest at the court of King James IV in Edinburgh. Here in his palace, the Scottish monarch dined sumptuously in his banqueting hall, and his retainers never missed an opportunity to point out the pageantry to the MacLeods’ chief. The number of candlesticks, the size of the table, the height of the vault.

Damned snootiness of the Lowlanders! They thought Highlanders were dull barbarians, did they? And so it was that Alasdair got carried away again, got himself into trouble again.

“On my estate, your Highness,” he heard himself say suddenly, “there we have even a larger table than this, and brighter candles, nay, even our ceiling is higher.”

The words did not fail to have their effect; silence fell in the hall, and all eyes turned to the king. He hesitated a moment before answering.

“Well, then, I will travel to your domicile and see for myself the greatness of the MacLeods.”

There they were again, the troubles. How could Alasdair possibly wriggle out of it? A public backdown? Surely not. The ignominy would be terrible. And so he departed, not without a dash of panic in his luggage.

But back home, the scales soon fell from his eyes. He had, after all, all that he had promised. And so he set about preparing for the feast for the king.

When he finally arrived, Alasdair led him to the flat plateau of Healabhal Mhor, where he had food and drink carried up. “This is my table, your highness, is it not truly greater than yours?” Around the food stood quite a few clansmen, lighting the feast with torches. “Do not our candles shine brighter than yours?” – “You are right, MacLeod,” replied the king. “But where is your vault?”

MacLeod pointed to the sky. “God himself made it.”

Measured against the nearby Cuillins, for example, MacLeod’s twin mountains are little more than two hills. 471 metres rises Healabhal Mhor and 488 metres Healabhal Bheag. Surprisingly, the adjectives “mor” and “beag” mean just the opposite of the actual proportions. “Mor” means “big.” So the “big Healabhal” is the smaller of the two peaks, and the small one (“beag”) is actually the higher one. Reason for this twist: from Dunvegan and the road, the smaller one appears larger.

Incidentally, there is another story to the formation of the flat-topped mountains. For example, St Columba is said to have once visited the Isle of Skye to preach. But the resident ruler was less than accommodating and refused the saint hospitality. However, while Columba was preaching in the church, the sky darkened and a roar ensued. When the people stepped out, they saw that the tops of the two mountains had been cut off. And so Columba had his bed on one mountain and his table on the other.

For those who prefer a more scientific explanation, the glaciers of the last ice age 15,000 years ago carved it out.

By the way: That Alasdair Crotach was quite vindictive and cruel is no invention. For example, he was responsible for the mass murder on the three small islands of Eigg, Rum and Canna. He later retired at the end of his life to the monastery at St Clement’s Church on Harris, where his grave can also be found.

First: I haven’t done the walk myself, but am happy to point out the possibility here, which you can read about in more detail at Walkhighlands.

As for photos, I can already get one to say more. So you get good subjects from both Dunvegan Castle and from graveyard in Duirinish. Likewise from the road from A863. You can find out more about this at the Round trips across Skye.

On the way to Dunvegan via the A863 coming from Sligachan, the mountains are more often seen on the left. If you want to hike up, it’s best to park near Orbost House.

With sat nav: enter “IV55 8ZB”, this will take you up to Orbost. However, you might want to park in the bend about a kilometre before you get there.

Without sat nav: Coming from Sligachan, take the A863 until it turns left onto the B884 towards “Glenadale”. But then don’t follow the turning to Glenadale, go straight on to Orbost. After a short while you will come to a small rivulet that runs under the road. Park here on the side. The description of the walk can be found on Walkhighlands. 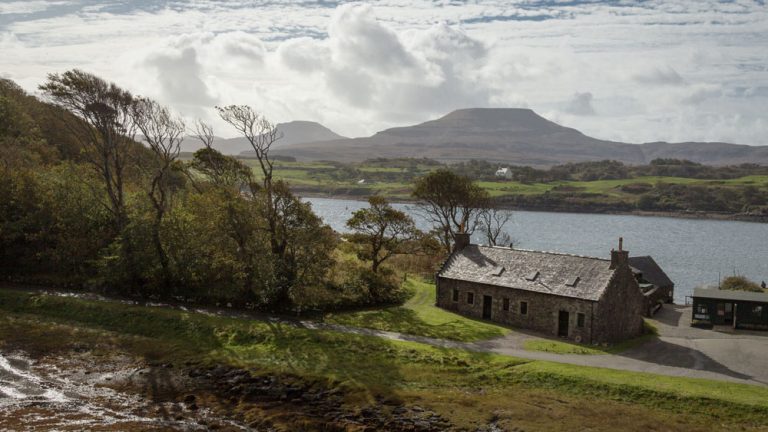 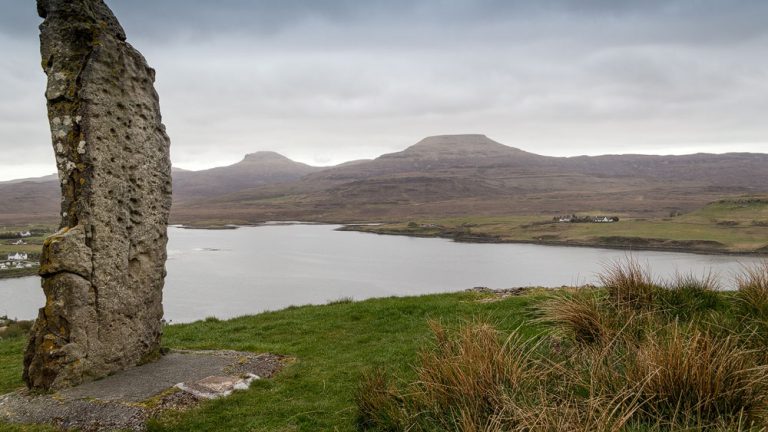